Plug and Play or Install ASIO Driver - your choice

To run the expanded Hi Res sample rates of 48 and 96 KHz, an ASIO driver is available for download from the ARX website - http://www.arx.com.au/drivers.htm.

Please make sure you have the USB I/O VSR connected to the computer before installing the driver.

Controls and Connectors
The front panel has Left and Right transformer balanced and isolated analog XLR Input and Output connectors that connect to all standard balanced analog Inputs and Outputs. On the rear panel there is a Type B USB connector, as well as a ground lift switch. Sample Rate LEDs indicate that the USB I/O VSR is connected and operating, and also which Sample Rate has been selected.

Plug and Play Option
We recommend running Win XP or later, or Mac OS X. Plug the USB I/O VSR into an unused USB port on the computer and it will be recognised as ARX Systems USB, and ready to use.

About Variable Sample Rate
The USB I/O VSR has a default sample rate of 44.1KHz, the same as used for audio CDs. This is the sample rate you get when you Plug and Play with the USB I/O VSR.

But, by installing the ARX ASIO driver you can sample the music at 48KHz or 96KHz, for even greater definition. 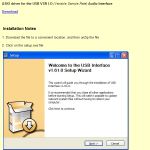 Hand Made in Australia - Exported to the World

Note: Unit's sample rate will default to 44.1 Khz if ARX ASIO Driver is not used.